“Life Together: Fight the Good Fight”

A little more than one week ago, we’d never heard of Anthony Sadler, Spencer Stone, or Alek Skarlatos. But we sure know who they are now! Don’t know what I’m talking about? These are the three young Americans, who together with a British businessman, fought the good fight while on vacation in Europe. While on a train from Amsterdam to Paris, they thwarted what would have surely been a blood bath on board the train. A young man from Morocco, armed with an assault rifle, pistol, knives, and enough fire power to kill untold numbers of people, was taken down by these four individuals and disaster was averted. To them, we owe a debt of gratitude for courage in the face of grave danger. They acted without regard for personal safety, and in so doing, many lives were saved. The suspect’s attorney says that his client merely wanted to rob passengers, but the weaponry he possessed says otherwise. The suspect is also believed to have connections with radical Islam. Let’s call this for what it was intended to be: a terrorist attack that was foiled by common ordinary people who chose to take action and fight the good fight (http://www.registercitizen.com/opinion/20150825/editorial-in-france-new-american-heroes-are-born). And that is exactly what we are called to do in today’s Epistle lesson: fight the good fight of faith. Our summer preaching series, “Life Together,” comes to a close today as we focus on Paul the apostle’s call to believers to put on the whole armor of God. The theme for today’s message is “Fight the Good Fight.” May the Lord’s rich and abundant blessing rest upon the preaching, the hearing, and the living of his Word for Jesus’ sake.

When I attended seminary thirty years ago, I do not recall anything being taught about spiritual warfare. Oh, it may have been mentioned in passing during certain classes, but there was nothing substantive taught on this important matter of faith. What exactly does “spiritual warfare” mean? It is the cosmic struggle between good and evil that is waged outwardly in the world around us as well as inwardly within the mind and heart. It is not merely physical or psychological, but spiritual, as Paul writes” “For we do not wrestle against flesh and blood, but against the rulers, against the authorities, against the cosmic powers over this present darkness, against the spiritual forces of evil in the heavenly places” (Ephesians 6:12). The truth is, when we are baptized and marked with the cross of Christ, that puts us into the crosshairs as a high value target on the enemy’s hit list. As baptized followers of Jesus, we can expect to suffer for our faith. We can expect some degree of spiritual warfare. It is a given. Like those three young men on that train, you don’t have to go looking for the enemy. Because we belong to Christ, the enemy will seek us out! The evidence of the spiritual forces of evil are all around us: greed and selfishness, violence and destruction, injustice and corruption, just to name a few. The truth is that these are only a mask, a front, for the cosmic forces of evil that are behind them and control them. These forces are at work in the world in which we live. Against them, we seem pretty small and puny; powerless to effect any real change. What are we to do?

Paul reminds us: “… be strong in the Lord and in the strength of his might” (Ephesians 6:10). In truth, the victory over evil, sin, death, and Satan has already been won. This is what Jesus accomplished on the cross when he shed his precious blood and willingly gave his life for us and for our salvation. Before he died on that cross, Jesus cried out, “It is finished!” (John 19:30), and it was – the defeat of evil, sin, death, and Satan was finished. Through his sacrificial death, Jesus broke the strangle-hold of sin and Satan. Let us never forget that in Baptism we are united with Christ who has done all this! We belong to him! Here’s the thing: although these enemy forces have been defeated, they have not yet been destroyed. That will come on the last day when Christ returns in power and glory to judge the world in righteousness. Until then, these enemy forces are on the loose and continue to exert great power for evil. Jesus reminds us that all of this is not always “out there” somewhere, but come from within our own hearts: “For from within, our of the heart of man, come evil thoughts, sexual immorality, theft, murder, adultery, coveting, wickedness, deceit, sensuality, envy, slander, pride, foolishness” (Mark 7:21-22). Our only hope is in the Lord and in the strength of his might. The One who cried out on the cross, “It is finished!,” who fought the good fight for us, is the One whose blood cleanses us from all sin (1 John 1:7).

So how do we fight the good fight? It’s not foolishly rushing headlong into battle and engaging evil in violent acts, but resisting evil and its influence with the whole armor of God: the belt of truth (God’s Word is truth – John 17:17), the breastplate of righteousness (the robe of righteousness – Isaiah 61:10), shoes of the Gospel of peace (the peace of Christ – Romans 5:1), the shield of faith (the shield of God’s favor – Psalm 5:12), the helmet of salvation (salvation is in Christ alone – Acts 4:12), and the sword of the Spirit, the Word of God (God’s Word gives light – Psalm 119:105). Paul’s use of these weapons mirrors what a first-century A.D. Roman foot soldier would have been familiar with. There is a difference between these last two and what comes before them. Salvation and the Word of God are what God gives and the believer receives, just as that first-century Roman solider would have received from his attendant the two final pieces of weaponry before battle: his helmet and his sword. That word here refers to using the spoken Word of God as a means to repel the enemy’s attacks, even as the Lord Jesus did in his temptation in the desert (Matt. 4:1-11; Mark 1:12-13; and Luke 4:1-13). So when we put all of these together: truth, righteousness, the Gospel of peace, faith, salvation, the Word of God – these are our weapons for spiritual warfare, and they are powerful, more so than anything the enemy has. Luther captured this in his powerful hymn, “A Mighty Fortress Is Our God,” which we sang at the start of today’s service:

Though hordes of devils fill the land, all threat’ning to devour us,
We tremble not, unmoved we stand; they cannot overpow’r us.
Let this world’s tyrant rage; in battle we’ll engage!
Hi might is doomed to fail; God’s judgment must prevail!
One little word subdues him.
(Lutheran Book of Worship 229, stanza 3)

That “one little word” is Jesus – that Name which is above every name, “that at the name of Jesus every knee shall bow, in heaven and on earth and under the earth, and every tongue confess that Jesus Christ is Lord, to the glory of God the Father” (Philippians 2:10-11). We do not yet see this in its full and final sense, but we shall! Being so equipped with God’s own virtues, having received the benefits of salvation and the Word of God, we are called to turn our attention to prayer, as Paul tells us: “… praying at all times in the Spirit, with prayer and supplication. To that end keep alert with all perseverance, making supplication for all the saints” (Ephesians 6:18). Paul closes with the great irony that though he is God’s official representative, his ambassador, he is an ambassador in chains. Think of that irony in terms of the role that ambassadors continue to have today through our State Department. What an outrage there would be if any nation’s ambassador would be in chains! In the midst of this, Paul asks for the prayer support of the Ephesian believers as he anticipates going to Rome, standing before the Roman emperor and his court to present the Gospel message of Jesus Christ. Paul’s desire is that in the midst of spiritual warfare he may “declare it boldly” (Eph. 6:20). May that be our prayer also!

May we draw strength and courage in our life together from him who gave his life for us, our Lord Jesus Christ, and with his power fight the good fight. God help us to do this for Jesus’ sake. Amen. 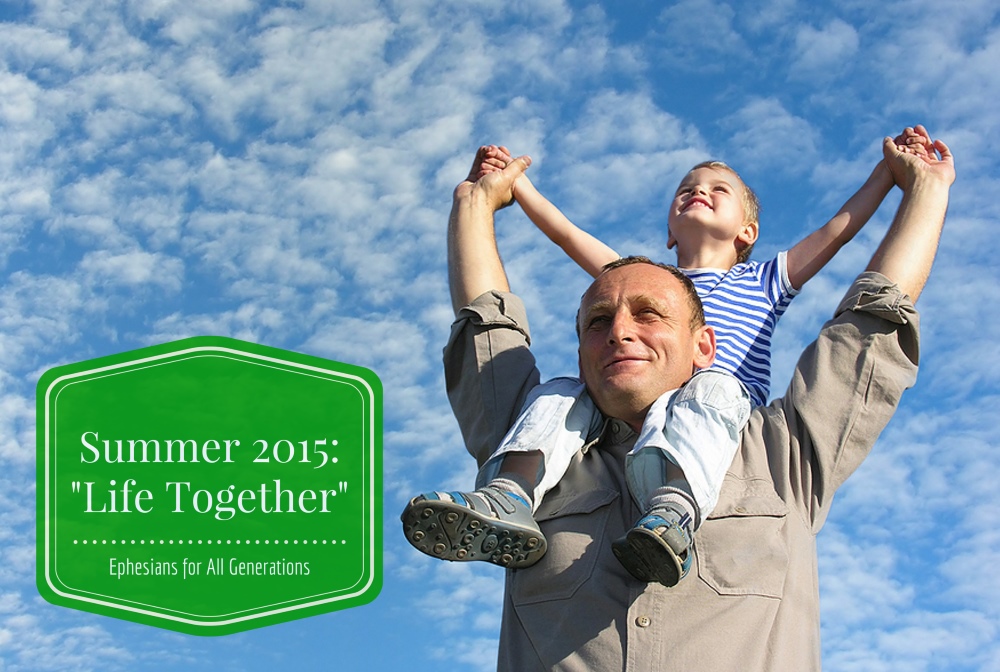 More in Life Together

All in the Family