The King's Royal Roots: Back to the Future

For a while now, people have been making preparations to celebrate a great event in the battle between darkness and the light. A long time ago and far, far away, something completely unexpected happened, something that completely changed the tide of the rebellion. But here we are now, as people have planned how they’re going to be spending the big day, maybe even picking special outfits to wear as they gather with friends and family. How about you? How have you gotten ready… for Christmas?

You’ve probably heard that a new Star Wars movie is coming to town: The Force Awakens. It’s the first new Star Wars in a decade, and, as some thrilled viewers have reported, a return to form not seen since 1983’s Return of the Jedi. In the months leading up to this weekend’s release, I’ve felt for the people who’ve been making the new movie. They’ve been living under the pressure of enormous expectations to tell the story of what happened after the events depicted in the original film trilogy (Episodes IV-VI, for the faithful). And from what I’ve heard so far – avoiding spoilers – they’ve succeeded in recapturing the spirit of what had come before.

It’s a big question to have to answer: what happens after the deliverer comes and wins a great victory for the people? In the prophet Micah’s day, a couple of centuries after King David’s victories over the nation’s enemies and his legendary reign, the people of Judah and Israel were living in comfortable times. They were doing pretty well for themselves, and the Assyrian Empire to the north had largely left them in peace. But in their peace and prosperity, they’d become complacent and corrupt. Like the other prophets of his day, including Isaiah, Micah delivered God’s call for the people to turn from their unfaithfulness in the face of coming judgment. Living in a manner that ignored and rebelled against God’s instruction, God’s people had lost their way. They needed to be recalibrated, set back in the right direction.

As we look ahead to the near future of Christmas and the new year, how does your life need to be recalibrated? Peace and prosperity can leave you complacent. Complacency is a stumbling block, one that can trip you up into losing your way. The peace and prosperity that our nation has enjoyed now seems to lead people into celebrating – or worrying about – all the stuff that’s around Christmas, rather than celebrating the great act of the light that stands at the center of Christmas. We’ve allowed ourselves to go off-course, mostly because we’re convinced of the rightness of our desires and our perspectives. And if we look back to a long time ago in a galaxy far, far away, we’ll see that we aren’t alone in that.

Like many people who grew up on the original Star Wars trilogy, I was a little disappointed with the prequel movies when they came out. But after hearing what others have had to say about the plot points of the prequels, I’ve come to appreciate some aspects of the story those movies tell.  There’s a thread that runs through the background of Episodes I-III which centers around a prophecy. This prophecy tells of a Chosen One who would bring balance to the mystical Force which is such a huge part of the Star Wars universe. The Jedi, who have long been the good guardians of the galaxy, thought that the prophecy would point to someone who would further their cause. They assumed it to mean what they wanted it to mean. However, the Jedi had lost their way in complacency and failed to understand that “balance” between the Light Side and Dark Side of the Force wasn’t going to be a good thing for them. The boy at the center of the prophecy would ultimately be the agent of their doom – and, maybe, their salvation.

The opening of the prophecy from Micah that we heard today is probably the best-known part of this book of the Bible. “But you, O Bethlehem Ephrathah, who are too little to be among the clans of Judah, from you shall come forth for me one who is to be ruler in Israel, whose coming forth is from of old, from ancient days.” Pretty much all of God’s word through the prophet up to this point, though, had been a word of warning and coming judgment. Because the people had been unfaithful, the Lord warned that it would only be a matter of time before the Assyrian Empire strikes back to the south and shatters Israel’s peace and prosperity. Their complacency would come to an end, and they would be recalibrated – the hard way. But God wouldn’t leave His people lost. Here in Micah’s prophecy, the Lord promised a new hope that would come from the little town of Bethlehem. The restored people could head into the future in the spirit of the king who had come before.

Centuries later, as Jesus in Galilee calling those who would be his disciples to follow him, one of them, a man named Nathaniel, famously asked, “Can anything good come out of Nazareth?” But what if Jesus was known as “Jesus of Bethlehem” instead? Nobody back then would ask, “Can anything good come out of Bethlehem?”! Bethlehem was the city of David, the great king that the people remembered for century after century. And even Herod’s scribes recall Micah’s words when the wise men came to Jerusalem seeking the one who had been born king of the Jews: they knew the prophecy that the great King God would send into the world would be from Bethlehem.

God worked in an unexpected way before: David was the least of his brothers, from the least of the villages of Judah. God worked through David to deliver His people and give them peace, resetting their course as a nation. But David wasn’t perfect. This king lost his way in prosperity, giving in to complacency and – worse yet – adultery and murder. The people who looked to Micah’s prophesy for hope needed a king who was even better than David.

That’s what we’re looking ahead to in this season of Advent. Jesus, whose birth in Bethlehem we’ll again be celebrating in just a few days’ time, was the ruler from David’s line that God had promised. Jesus had royal roots: he was David’s son, descendant of the great king, but he was also David’s lord. Jesus was the greater king that the people needed – the king we need – because he didn’t lose his way. He was faithful for you and for me: he followed his Father’s will across his journey through our world from Bethlehem’s manger to Calvary’s cross, carrying the guilt of our complacency and our rebellion into death once and for all.

As you move from Advent into Christmas and the future beyond, can do so in the spirit of what has come before. In Jesus, we have a greater king than David, one who has reclaimed the glory that God promised by bringing us into a restored relationship with God. Jesus’ history is your history. Your family has its roots in Bethlehem, too. We started this time of Advent by talking about home, the king’s city. Consider your home and your origin as God’s child in the water of Baptism and know that there He gave you faith, a power greater than any force in the galaxy. Look back to the future with Micah and see a life with God – your life – that is not mired in complacency but rather set free to live in the light of Christ.

A long time ago in a Bethlehem far, far away, something happened that would change the course of history: the Savior was born. The king is coming! And he shall be our peace. 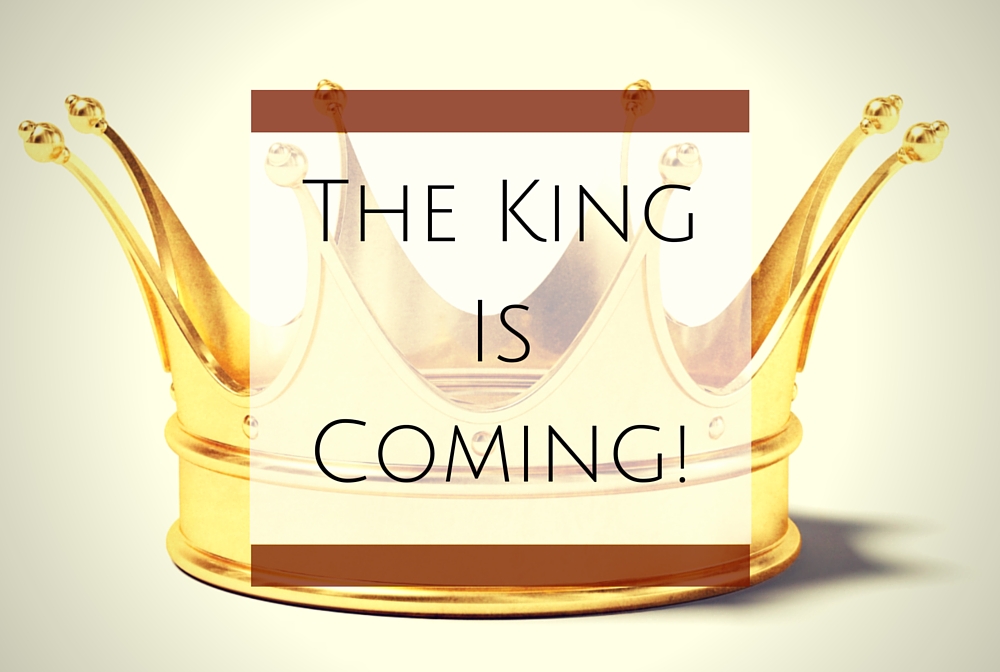 More in The King Is Coming!

The King is Born!