My day did not go according to plan. I had my to-do list filled with things to cross off on Friday about a week ago, so I was looking forward to a particularly productive day. It had been a shorter workweek due to my travels to Indiana for my grandmother’s funeral, though I was able to get a lot done on Thursday once I had returned to the church office. But getting ready to head out the door on Friday morning, right out of the blue, my heart started beating irregularly. It’s something that’s happened twice over the past decade, so I had a pretty good idea what was happening. After a minute or so of this weirdness, I concluded that it was time to visit the friendly health professionals at my local emergency department. Unfortunately for me, the initial round of medicine they gave me didn’t completely reset my heartbeat, so I got admitted to the hospital for follow-up treatment and observation. So by that point on Friday afternoon, I finally accepted that my to-do list wasn’t going to be as done as I’d expected it’d be that day.

Jesus’ day didn’t go according to plan. In his Gospel account, John tells us that Jesus was attending a wedding in Cana of Galilee, maybe four to ten miles away from Nazareth where Jesus grew up. It might have been a relative’s or close friend’s wedding, as Jesus had been invited to come and bring his disciples along, too. The wedding feast was a pretty big deal, and the host was expected to provide food and wine enough for all the guests for the duration of the feast. Reading through the Scriptures, you’ll time and again see wine used as a symbol of God’s blessing, of abundance, of joy. If the wine ran out at a wedding feast, joy would rapidly follow. It’s a faux pas which would cause considerable embarrassment for the host family. That day in Cana, the wine ran out. How did it happen? Did the host not make appropriate plans? Well, consider this: it’s entirely possible that Jesus and his disciples are partly responsible for the early emptying of the wine flasks. Imagine at least twelve extra guys showing up at your big party and you might start to see how the beverage runs out. When Mary comes to Jesus with the problematic (and potentially embarrassing) news, she’s looking for him to help out, to fix it.

Mary expected Jesus to do something about the looming disaster that day. Maybe she wanted him to go out and get more wine from the shopkeepers. While we don’t know what exactly Mary expected, she still trusts that Jesus will do something, directing the servants there to do whatever he tells them to do. But as Jesus told Mary, his “hour” had not yet come.

The people of Jesus’ day had expectations about the Messiah. Many thought that the Messiah (translated “Christ” in Greek), God’s anointed one, would be someone who would free them from foreign rulers like the Romans. He would make things right for Israel, fix their problems, so that they would no longer know need or suffering; instead, they would be blessed by God to become a prosperous people, praised by the rest of the world. They definitely didn’t expect their Messiah to go to a cross. But that’s when the Messiah’s hour would come, when he would complete his saving work. Even so, Jesus does the unexpected that day at Cana and gives a sign which points to the joy that he would bring into our world.

Telling the servants to get the large stone jars that Jewish people used for ritual washing, Jesus has them fill them to overflowing with water. The servants did so, and then follow his next instruction to take some from the jars and give it to the master of the feast, though that was kind of an odd thing to have them do. What came next was truly unexpected, though: the water had become wine – and the best wine, at that!

No, Jesus’ day didn’t go according to plan, but he still responded to the need that was there to save a family from embarrassment, guilt, and shame. He revealed his divine power in taking the ordinary and making it into something new and extraordinary in an unexpected way. That’s God at work. Take a look back, though, to see who it was that Jesus included in this revelation at Cana in Galilee.

Jesus doesn’t reveal himself as the Messiah to the bride and groom or the hosting family and their guests. He doesn’t come to the master of the feast and say, “So I heard you ran of wine. Try some of this!” No, others take the miraculous wine to be served, with no fanfare. It’s the servants at the wedding feast who are the first witnesses of Jesus’ first sign. The servants are doing their jobs, following instructions, keeping things moving along, part of the background of daily life. But it’s exactly those least likely people at the place who get to see the greatest thing that would happen there. Jesus included them in the unexpected joy that he was bringing into the lives of the people gathered for that wedding – and the lives of all those who would come to know him as the Messiah.

During this season of Epiphany, we remember that Jesus is the Savior for all people, the greatest and the least, and that includes those people that you and I might not give a second thought to as we go through our days. They’re our neighbors, too: the barista or lunch server, the cleaning staff and the flight attendant, the cashier and the care worker. Each and every one of them needs the light and life that Jesus brings into our world, just as much as we do. Yet how often do we overlook them just going about the days we’d planned?

I met a bunch of unexpected neighbors last week when my day didn’t go as I planned. Even starting from my arrival at the emergency department, I got to speak with dozens of people I never would have seen otherwise. But maybe even more important: I got to listen to them. Nurses, technicians, EMTs – they talked with me about what was going on in their lives; many times, without me asking, or without them knowing that I was a pastor. I had the unexpected opportunity to pray for those who bring God’s gift of healing through the medical arts and for other patients who were in need of that healing. And while I’ve told some people that I would have preferred that God didn’t send me to the hospital in that way to meet those unexpected neighbors, I’m glad for the opportunity He gave through it.

Looking back to last weekend’s theme and sermon, God’s word pointed us to the truth that Jesus is neighbor to us all. If you’re still wondering about this whole “neighboring” thing that’s our Being SJLC (Serving Jesus + Living in Community) focus this Epiphany, look at it this way: neighboring isn’t about looking for what someone else can do for you as they meet your expectations for a relationship.

Measuring our lives by God’s standards, we all fall short. You haven’t met God’s expectations; none of us have. But here’s the great message of Epiphany: you are the unexpected neighbor! You could never expect it, but Jesus delivered God’s love for you and me. That’s what the Messiah did for each and every one of us, giving himself so that we wouldn’t be crushed by the embarrassment, guilt, and shame that our lack of worthiness deserves.

Jesus has come into our world and into our lives to bring the unexpected joy of a restored relationship with God, a relationship which is lived out as you and I act in love towards all our neighbors, even the unexpected one. As the people of Jesus, look to him for that joy as you gather at the wedding feast of the Lamb of God with his Church in Holy Communion. There, he again provides the best wine: the wine of his blood. That wine, which flowed from his side on the cross, more than provides for what you and I lack. Jesus’ wedding feast will last for eternity, and you are his neighbor and welcomed guest. And we get to join him as he invites more and more souls to share in his joy.

Maybe your day doesn’t go according to plan. Maybe it does. Whatever happens, though, may the One who did the unexpected at Cana’s wedding feast open your eyes, your ears, your heart, and your hands to the unexpected neighbor you’ll meet that day – and may He bring His joy to your meeting. 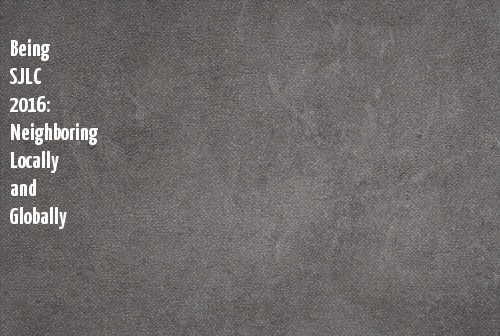