If you’re in a Lutheran congregation for worship, you’ve probably spoken the words of either the Apostles’ Creed or the Nicene Creed each weekend. Our word “creed” comes from the Latin credo, which translates to “I believe.” Along with the Athanasian Creed, the Apostles’ and the Nicene comprise what we know as the three ecumenical creeds, statements of faith shared by Christians across the centuries and around the world.

If asked, how would you tell someone what you believe? How would you give voice to your faith? As the Latin origin of the word creed would indicate, a creed can help you articulate what you believe. Even if you don’t – and in many cases, probably shouldn’t – just recite one of those three ecumenical creeds in response to someone’s asking about your faith, the creeds provide a summary of what the Christian faith is all about. Using their framework, you can confess your faith; even better, you confess the One who’s given you faith in the first place.

The creeds are, essentially, distillations of what the Bible teaches us about God and what He does to restore our relationship with Him. They originated during specific periods of time when the Church at large needed to clarify what Christians believe and teach, particularly in response to false or misleading teaching that had been circulating in some corners of Christianity.
The Apostles’ Creed is the most ancient of the three – and the most concise. While we don’t hold that it was written by the Twelve Apostles themselves, it certainly reflects the faith handed down by them to the generations of Christ’s Church that followed them. In a straightforward way, the Apostles’ Creed (known simply as “the Creed” in Martin Luther’s Small Catechism), frames what it means to live by faith. The Creed’s place in the Small Catechism following the Ten Commandments should be taken as a comfort: after recognizing that we are broken and unable to meet God’s demand of perfection, we get to hear what God is going to do to rescue us from our situation. The Creed points us to how God has broken into His creation to bring His gifts to all.

We call each of the three parts of the Creed an Article. The opening words of the Creed, the First Article, point us to the Person of God the Father. Those words, brief as they may be, acknowledge the authority and provision of God as Creator and sustainer of the universe. But when you dig into the explanation of the First Article in the Small Catechism, you’ll find that this confession of faith doesn’t stop with an acknowledgment of who our heavenly Father is; it’s a recognition and celebration of all the ways that He cares for us, His creatures. As Scripture shows, God the Father doesn’t just provide us with what we need directly. More often than not, He works in, with, and under what He has created bring us that care. The Father works through the ordinary to show us His love.

As the First Article directs us to the Father, the Second lifts up God the Son. In this, the longest of the three Articles, we see the heart of our faith. We confess what it means to be a Christian by pointing to Christ. By faith, we proclaim Jesus’ identity as the Savior who entered into a specific time and place in history to live and die for us – and even more significantly, to rise from death for us. In proclaiming Jesus’ identity as the Messiah, we recognize our own as redeemed children of God through His grace in Christ. God has bought you and me back from sin through Jesus, who took our place under judgment. The Second Article stands at the center of the Creed, and the center of our faith. Look at that central purpose in Luther’s explanation of this Article: “that I may be His own.” It’s all about Jesus. It was all about Jesus 500 years ago when Luther posted his 95 Theses and inadvertently kicked off the Reformation; it’s still all about Jesus now. Because through Jesus, all of creation has been given the key to restored life with our Creator.

Coming to the Third Article, we confess the Person of the Holy Spirit and, more prominently, His work. The Holy Spirit takes everything that’s come in the two preceding Articles and makes it all personal. We don’t see the Spirit, but we witness His work. He makes the Father’s rich grace and the Son’s redemption and brings it to us. The Spirit points us to Jesus and connects us with God’s grace. The Spirit’s work is such that no Christian is left alone and outside of community. He incorporates us into God’s kingdom and gives us the faith that lets us receive God’s gifts.

“I believe.” The Creed frames what it means to live by faith. Faith – which itself is simply receiving God’s gifts – is the thing that brings us together in this season of Lent. We are people called to live by faith, receiving God’s gifts and reflecting on them. If you want to better understand the point of the cross in the life of the Christian, go back and re-read the Creed and its explanation in the Small Catechism. Look to how God the Father, God the Son, and God the Holy Spirit are at work to restore a relationship that had been broken by sin. See how God has broken into His creation to bring His gifts to you and your neighbor. Hear what God has done. Listen for His word of grace. And in faith, in community with the all the redeemed in Christ, confess the Creed. “I believe.” 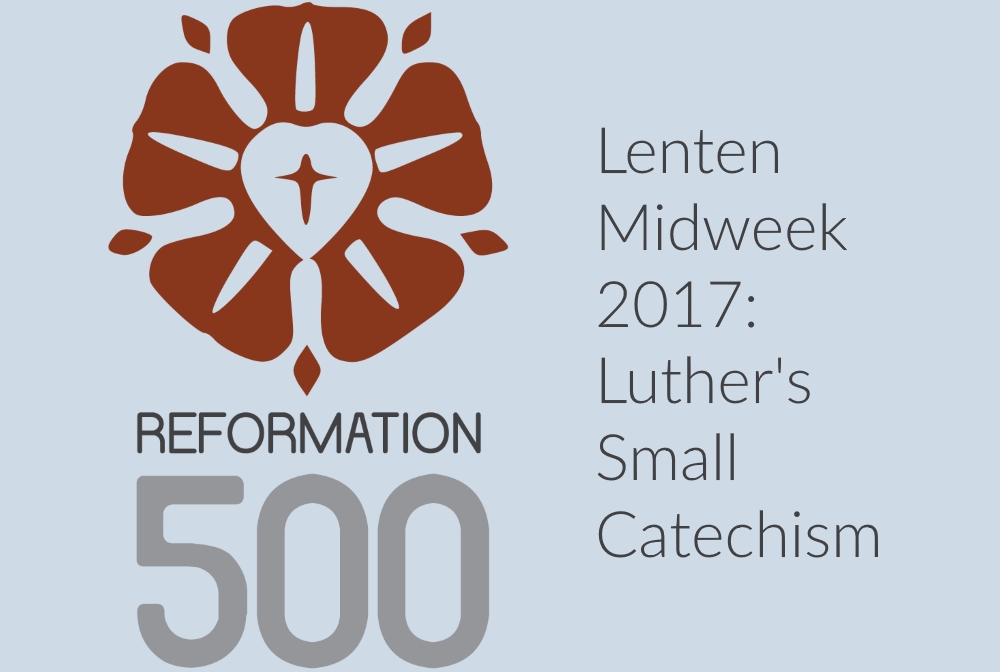 The Sacrament of the Altar

The Sacrament of Holy Baptism