“Go and Be Reconciled: Restore Gently”

Brothers, if anyone is caught in any transgression, you who are spiritual should restore him in a spirit of gentleness. Keep watch on yourself, lest you too be tempted. – Galatians 6:1

Is your journey taking you where you need to go?

This weekend, we’re entering the time we call Holy Week.  We’re heading to the end of the season of Lent and towards the high point of the Christian year at Easter.  Everything in our worship life as a congregation is calling us to remember, to reflect on, and to celebrate the great gift that God gives us in His Son, who came rescues humanity – and all creation along with us.  Riding that donkey into Jerusalem, Jesus’ journey would take him to experiences that he should never had to endure: betrayal by one of his close companions, suffering suffer at the hands of spiritual and political leaders who thought they were doing the right thing, and cruel execution on a Roman cross.  But worse than all that, Jesus had to experience separation from his Father as he took all our sin onto himself to carry it into death for us.  Jesus’ journey led him to the place where he would bring reconciliation and peace between God and us.

Our journey though Lent in the theme of Go and Be Reconciled has provided a God-pleasing model for reconciliation as Christians, a model that can be put to use with each other and with those who don’t know Jesus.  If you’ve been with us these past several weeks, you’ve seen how this model for reconciliation begins in God’s work to reconcile us to Himself, then moves out from that relationship, pouring over into our relationships with each other.  Today we come to the remaining piece for bringing about reconciliation with people in the world around us: restoring with gentleness.

If the journey of reconciliation is going to take you where you need to go, it must lead to a restored relationship.  That relationship probably won’t look like it did before conflict entered the picture, but we’re looking for it to be at least as strong as it once was.  We’re looking for healing through reconciliation.  Restoration – with gentleness – is an intentional step in supporting such healing, getting you and the other party to where you need to be to move forward in harmony.  Restoration is about mending what’s been broken.

Ultimately, this restoration is about bringing back someone who has been ensnared by sin.  That’s what St. Paul’s telling us in Galatians 6:1.  As a starting point for restoration, God calls us to be ready and willing to address the sin among us in our relationships.  If we just ignore sin, it’s as if we’re leaving the person we’re called to love trapped in quicksand.  It’s not a good place to be.  If we care about them, we need to both recognize the sin that has taken hold of them and call it to their attention.  And as you heard Paul say in today’s epistle reading from Philippians 2, we who follow Jesus need to look out for this neighbor as Christ has cared for us.  Instead of leaving them to sink deeper and deeper in this sin, we’ve got to reach out to them to draw them back up onto solid footing.

So if you’re going to need to do this as Jesus disciple, how do you go about restoring someone with gentleness?  Let’s start by saying what it doesn’t look like.  When you restore gently, it’s not vengeful or retaliatory.  You’re not God; you’re not in the judge’s seat.  He alone has the right to deal with us according to our sin.  Gentle restoration isn’t self-righteous or hypocritical.  Remember that you, too, have fallen short and been ensnared in sin.  You, too, have needed restoration and reconciliation in your life.  And finally: gentle restoration doesn’t try to provoke the person you’re trying to help.  It’s about building up the other, not tearing them down.  If you’re a parent, pay special attention to this aspect of restoration when working with your children.

What, then, does it look like to restore someone gently?  Be compassionate.  Seek to understand where they’re at and where they’ve been.  Think about how you might have gotten tripped up in a similar way in the past.  Be patient.  If you’re going to mend something that’s been torn, it can take time.  Likewise, it can take a while to restore relationships that have been strained or broken by conflict.  Don’t rush thing along.  Show love towards the other.  Help them to see that you want good for them, that you want your journey together to continue as something that blesses everyone it.

In Jesus’ entry into Jerusalem on Palm Sunday, we have a perfect example of how God restores with gentleness.  Jesus could have walked in, as he’d done several times before.  But he rode in on a donkey; a colt even, a young donkey on which no one had ever ridden.  It was a kingly choice.

Back then, if a king were going to ride into a city, he could choose his mount: a warhorse or a donkey.  Entering a city on a warhorse implied a show of force and power that could be brought down upon the people there.  It wasn’t usually a good sign.  Riding in on a donkey, though, meant that the king was coming in peace.  Centuries earlier, King David called for Solomon to ride a mule when his son went to be anointed as king of the nation.  And as Jesus came into Jerusalem, the people called out for the return of David’s kingdom (Mark 11:10).  The palm branches that they gathered and waved or threw down before Jesus’ path were symbols of a victory over an enemy.

Today, Christians look back on that Sunday when Jesus rode into Jerusalem, calling it “the Triumphal Entry.”  We wave palms to celebrate the king who comes in the name of the Lord.  But as the Lenten hymn reminds us, there is “no tramp of soldiers’ marching feet” as this king comes to us.  Jesus did not enter Jerusalem with an army to overthrow the Roman government.  He rides a donkey, not a warhorse.  He responds to our cries of “Hosanna, save us!” not by giving us what we deserve, but by giving himself for us.

On this Sunday of the Passion, Christians remember and celebrate Jesus’ gentleness.  He is the King of kings who took the journey that led him to suffering and death, in your place.  He refrained from using his divine power in order to be the servant humanity needed.  All glory, laud, and honor are rightfully his, but he set it aside, emptying himself in the ultimate act of humility.  In obedience to his Father’s will, Jesus came to serve you, to restore you with gentleness into relationship with God.  His journey took him exactly where he needed to go so that you could be where you need to go.

Jesus makes restoration and reconciliation possible.  He is the servant who went to the cross for us.  And because his journey didn’t end at the cross, ours doesn’t, either.  “God has highly exalted him and bestowed on him the name that is above every name, so that at the name of Jesus every knee should bow, in heaven and on earth and under the earth, and every tongue confess that Jesus Christ is Lord, to the glory of God the Father.” (Philippians 2:9-11)  Jesus is the Prince of Peace.  In him we are restored.  In him, we are reconciled.

Peace be with you!

Have this mind among yourselves, which is yours in Christ Jesus, who, though he was in the form of God, did not count equality with God a thing to be grasped, but made himself nothing, taking the form of a servant, being born in the likeness of men. – Philippians 2:5-7 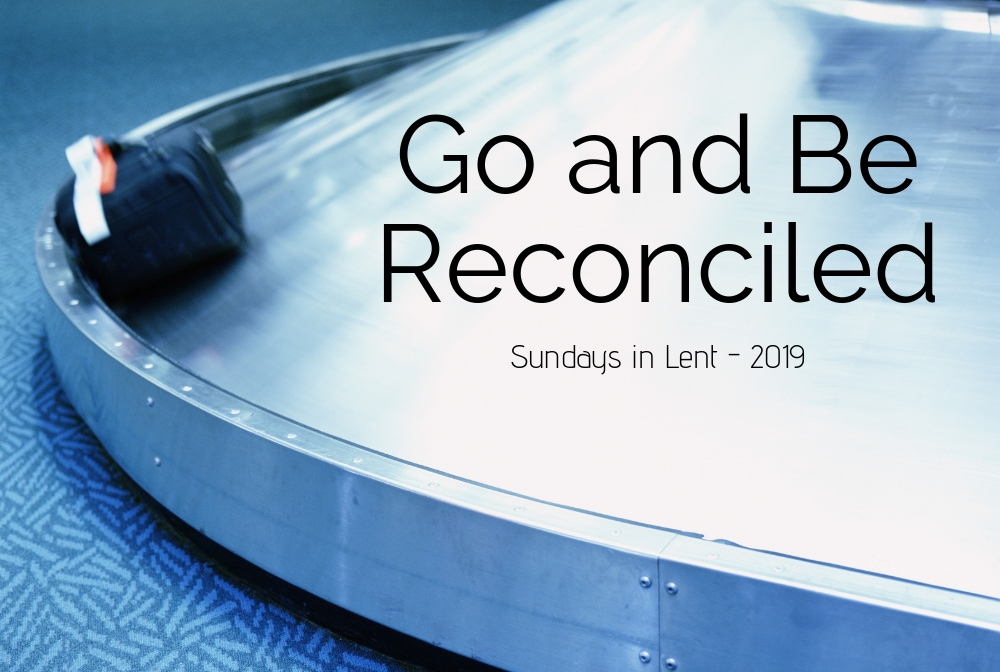