“The Resurrection of Jesus”

When the Sabbath was past, Mary Magdalene, Mary the mother of James, and Salome bought spices, so that they might go and anoint him. 2 And very early on the first day of the week, when the sun had risen, they went to the tomb. 3 And they were saying to one another, “Who will roll away the stone for us from the entrance of the tomb?” 4 And looking up, they saw that the stone had been rolled back—it was very large. 5 And entering the tomb, they saw a young man sitting on the right side, dressed in a white robe, and they were alarmed. 6 And he said to them, “Do not be alarmed. You seek Jesus of Nazareth, who was crucified. He has risen; he is not here. See the place where they laid him. 7 But go, tell his disciples and Peter that he is going before you to Galilee. There you will see him, just as he told you.” 8 And they went out and fled from the tomb, for trembling and astonishment had seized them, and they said nothing to anyone, for they were afraid.

Following our celebration of the Resurrection of Our Lord just a few days ago on Easter Sunday, I want to share with you some words written by the great reformer, Dr. Martin Luther. He wrote these bold defiant words as part of his Easter sermon in the year 1530, based on the Gospel lesson that was just read from Mark 16:1-8:

Know ye, then – sin, death, devil, and everything that assails me – that you  are missing the mark. I am not one of those who are afraid of you. For Christ, my dear Lord, has presented to me that triumph and victory of His by which you were laid low. And from this very gift of His I derive my name and am called a Christian. There is no other reason. My sin and death hung about His neck on Good Friday, but on the day of Easter they had completely disappeared. This victory He has bestowed on me. This is why I do not worry about you. (What Luther Says: An Anthology, Vol. III, compiled by Ewald M. Plass. St. Louis: Concordia, 1959; p. 1218).

That is powerful! This is the glorious truth of Christ’s Easter victory, and it changes everything. We do not need to live in fear of what happens when I die. We are safe in the nail-pierced hands of our risen Lord Jesus Christ who died and now lives and reigns for all eternity. If death and the grave could not hold Jesus, then if Jesus is ours, death and the grave cannot hold those who belong to Jesus. The words of that beloved Psalm 23 remind us: “Even though I walk through the valley of the shadow of death, I will fear no evil; for you are with me” (Psalm 23:4). Because Jesus is with me and with you, there also is resurrection and eternal life.

The women who had been eyewitnesses of Jesus’ death and burial (Mark 15:40, 47) were now the first witnesses of his resurrection. Though Jewish law prohibited the witness of women, God did a work-around with that on Easter morning! Mark’s stark, bare bones account of that first Easter morning paints a very realistic picture as those grief-stricken women encounter the angel of the Lord in the empty tomb. They were terrified and we would have been terrified, too, had we been there. The empty tomb and the graveclothes without a body could mean many different things. The angel had to interpret all of this for them to help them – and us – understand what had taken place. The stone had been rolled away not so much to let Jesus out as to let the women in order to see what the Lord had done.

Having seen the empty tomb and having heard the angel, the women were then given a mission: “Go, tell his disciples and Peter that he is going before you to Galilee. There you will see him, just as he told you” (Mark 16:7). Although we were not there on that first Easter morning like those women to see with our own eyes, we are witnesses of Jesus and his resurrection today. We stand in a long line of believers from those first Easter witnesses down to this very day, and like them, we have been called to mission: “Go and make disciples of all nations” (Matthew 28:18). We have good news to share with the world! Death is not the final word! In Jesus our crucified and risen Savior, there is forgiveness of sins, eternal life, and salvation! This is our Easter calling. This is our mission to the world.

May the Lord who has begun this good work among us bring it to completion in the day of Christ Jesus (Philippians 1:6). Christ is risen! He is risen indeed! Alleluia! Amen. 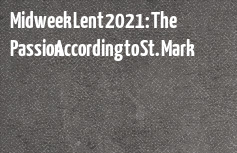 The Death of Jesus