“Places of the Passion: Golgotha”

Golgotha – an Aramaic word for “place of the skull.” Calvary – from the Latin word, calvaria, also meaning “skull.” Both words describe the same place: that hillside outside of Jerusalem where Jesus, together with the two criminals, was crucified on that Friday so long ago. Rome had a well-known saying about crucifixion: moris turpissima crucis, “the utterly vile death of the cross.” The gut-wrenching brutality, violence, and bloodshed that were crucifixion were so repulsive to polite Roman society that it was considered improper even to speak of this. No Roman citizen could be crucified; the practice was “reserved for slaves, pirates, and those political or religious rebels who had to suffer an exemplary death” (First Easter, by Paul L. Maier. San Francisco: Harper & Row, 1973; p.78). Today on this day we call Good Friday, the most solemn day of the Christian year, we travel in heart and mind to that same hillside outside of Jerusalem and view with repentance all that God in Christ has done for us. Our Lenten theme, “Places of the Passion,” takes us to that place where Jesus’ Passion, his suffering and death, culminated: the cross of Golgotha.

Matthew’s account of Jesus’ crucifixion tells us that there was darkness over the whole land from the sixth to the ninth hour; that is, from 12 noon until 3 p.m. This is the very time in which we gather today to remember and give thanks for Jesus’ life-giving death upon the cross. This darkness was not a solar eclipse as there was a full moon, which was why Passover was being celebrated. The darkness was the Father’s judgment against Jesus who was carrying the sin of the world. Christ hung in darkness so that we might walk in light. He was cursed so that we might be blessed. He was forsaken so that we would never be. He was bound so that we might be free. He died so that we might live. In Jesus, we are redeemed.

Matthew’s account of Jesus’ crucifixion tells us that the curtain of the temple was torn in two, from top to bottom. He also says that the earth shook, and the rocks were split. Josephus, a first-century Jewish historian, tells us that the curtain, or veil, was about 60 feet in height, separating the Holy Place from the Holy of Holies (What was the significance of the temple veil being torn in two when Jesus died? | GotQuestions.org). Something this enormous could not be easily torn apart, at least humanly speaking. But nothing is impossible with the Lord (Luke 1:37). The tearing of the temple curtain indicated that the chasm of separation between sinful man and holy God had been bridged through the sinless Son of God on Golgotha. All of the temple sacrifices pointed to the once-for-all sacrifice of Jesus upon the cross, “the Lamb of God who takes away the sin of the world” (John 1:29). Because of this, “we have confidence to enter the Most Holy Place by the blood of Jesus by a new and living way opened for us through the curtain, that is, his body” (Hebrews 10:19-20). In Jesus, we are reconciled.

Matthew’s account of Jesus’ crucifixion tells us that when Jesus died “the tombs also were opened. And many bodies of the saints who had fallen asleep were raised, and coming out of the tombs after his resurrection they went into the holy city and appeared to many” (Matthew 27:52-53). Jesus’ power over death was revealed already on Good Friday. Jesus is the death of death itself. The Roman centurion, who stood by and witnessed all these things, confessed what we also confess today: “Truly this was the Son of God!” (Matthew 27:54). This confession of faith is the good news that leads to forgiveness, life, and salvation. In Jesus, we are given new life; we are renewed.

Through the death of Jesus on the cross of Golgotha, we are redeemed, reconciled, and renewed. This is why today is called Good Friday. We have received good beyond imagination through Jesus. And because we are redeemed, reconciled and renewed through all that Jesus has done for us, even in the somber quiet of this day, we rejoice. The solemn rejoicing of Good Friday will soon to give way to shouts of triumphant gladness on Easter Sunday. Thanks be to God. Amen. 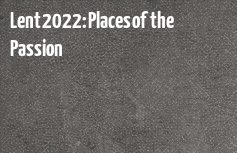 Places of the Passion: Bethphage