“What difference is it going to make? It doesn’t seem like it’s that big of a deal. I can see an immediate benefit, right in front of me. The rest of my life would stay the same, so why not make this choice here and now? I realize that it might not be what I’m supposed to do, but this is about real life – not some dusty rules or lofty ideals. Why am I even concerned about this? I should just do it and get on with the rest of my life. Really – what difference is it going to make?”

Imagine those words being spoken by one of the twenty-one Coptic Christians who were recently martyred in Libya because they refused to deny Jesus. What would they have gained, at what cost?

Imagine those words being spoken by Jesus during those forty days that he was out in the wilderness, bring tempted by the devil. What would he have gained, at what cost?

By now, I’m guessing you’ve heard that we’ve entered into the season that we call Lent. It’s this period of forty days (not including Sundays) that began on Ash Wednesday. Lent is a penitential time, which means it’s a time to especially realize the impact of the choices which you’ve made that have turned you away from God and His design for life. Lent is a time for reflection on that design for life found in God’s Word, seeing that the decisions you make really do make a difference – especially thinking about how you have and will respond to temptation when it strikes.

In Mark’s account of what happens following Jesus’ baptism in the Jordan, we hear that the Holy Spirit drives Jesus out into the wilderness. (The Greek word that Mark uses even gives the sense that the Spirit is throwing Jesus out there.) While the other Gospels record three specific instances of the devil tempting Jesus at the close of forty days, Mark points to the whole of those forty days as a time of temptation. Jesus is being tempted by the devil, just as we are. He’s the new people of Israel, his forty days out there calling back to forty years’ wandering in the desert before the Hebrews entered the Promised Land. Jesus was tempted, but he did not fall into sin.

Let’s pause here for a minute to clarify a couple of things. First off, trial and temptation are two very different situations, though the translated word “tempt” in the Bible could point to either, depending on how it’s used. Does God test His people? Certainly, but probably not in the way you’d think. God’s testing is about making you stronger and drawing you closer to Him; it’s not about seeing if you’re going to pass or fail. He knows us better than we know ourselves. When the Lord tested Abraham, for example, the testing strengthened the man’s faith and assured him that God would provide. When God puts you to the time of trial, even though it’s not likely going to be an easy or enjoyable experience, it’s not a time to be evaded or avoided.

Temptation, on the other hand, is flat-out bad. Every temptation is in some way a call to turn away from God, an appeal to look to yourself as the ultimate authority in life. Being tempted, however, isn’t itself sin. Temptation puts a choice before you, a choice that boils down to “Do I trust God or do I trust myself?” It asks the question, “What difference is it going to make?” hoping that you won’t see any problem in choosing what you desire over faithful obedience to God. Our trouble with temptation is that we don’t usually see a problem in picking the former – or if we do, we just ignore it. Left to our own devices, we’re all are inclined to choose what the temptation offers.

Some temptations feel bigger than others. The Christians martyred in Libya were offered the choice of denying Jesus or dying for their faith, a temptation with incredibly high stakes, and they were faithful unto death. In comparison, most of the temptations that we face each day might seem inconsequential… if we even notice them at all. Even the “small” temptations can be deadly on their own. And if we can’t be trusted to overcome “small” temptations, what hope is there with the “big” ones come along?

Praying the Sixth Petition of the Lord’s Prayer, we ask God to “lead us not into temptation.” God doesn’t tempt anyone to sin: that would run contrary to His very nature and His mission to restore His creation. When we pray “lead us not into temptation,” we’re asking God to keep us faithful. We’re asking for Jesus’ faithfulness. Jesus was tempted just as you and I are (Hebrews 4:15), but he remained faithful to his Father. Jesus rejected the devil’s call to put himself above the mission for which he came down from heaven. What difference did it make? For you and me, Jesus’ faithfulness makes all the difference in the world.

Did you think that Lent could be a time of hope?

In this Lenten season at St. John’s, we’ll be exploring what it means to be “Following Jesus” as his disciples in our day and age. You might be tempted to think that following Jesus just means believing that he’s the Messiah; however, following Jesus means following Jesus. As we consider the world’s reaction to his faithful obedience in the weeks ahead, you’re going to notice a theme: it’s not all sunshine and roses. So where’s the hope in that? Look at it this way: you won’t be following Jesus from a distance. He’s right here in front of you, calling you by name and leading you on the journey.

During the season of Lent, we put our congregation’s baptismal font at the entrance to the sanctuary. It’s a reminder that we enter into Christ’s Church through the gift of Baptism, where God calls us by name and promises to keep us as His own and go with us throughout life. And He does. We can speak to God at any time as we do in the Lord’s Prayer, coming to Him in times of temptation and times of thanksgiving. And He speaks to us through His Word.

Again, following Jesus means following Jesus. Jesus is the Word. Jesus – the Word of God who became human to redeem humanity, who remained faithful against temptation in obedience to his Father – this same Jesus is there in the Scriptures for you. In this penitential but hopeful season of Lent, know that you can follow Jesus by encountering him in the Bible. You’ll be tempted to neglect the study of God’s Word in favor many other things. Know, however, that Jesus is there by the working of the same Spirit Who sent him out to battle the devil in the wilderness. 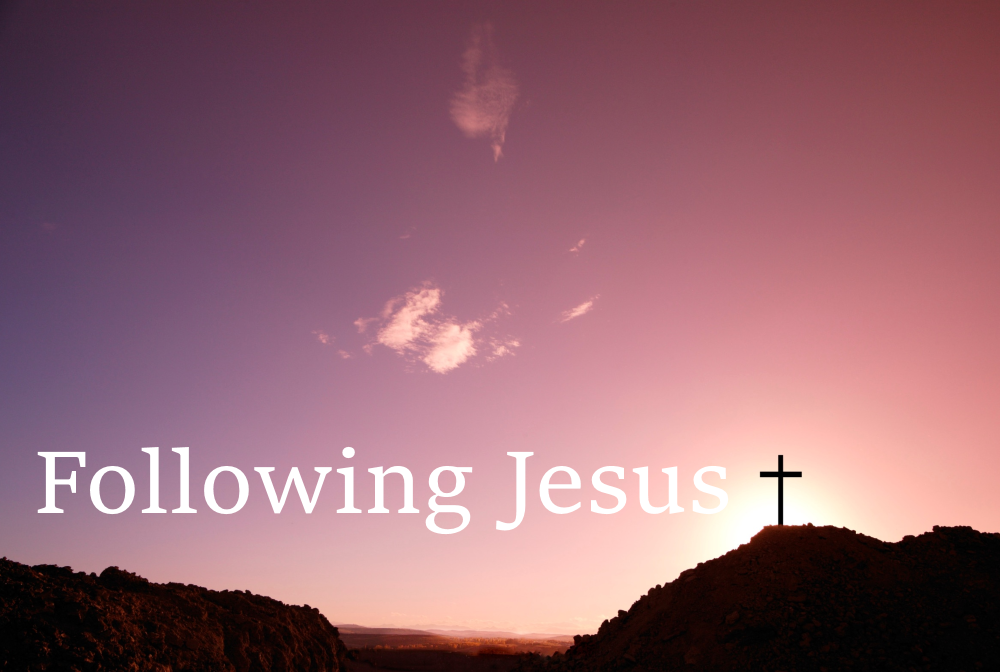