If you’ve been through Confirmation in a Lutheran congregation, you’ve likely heard of the 95 Theses, points for debate written by Martin Luther that were posted on the Castle Church door in Wittenberg, Germany back on October 31, 1517.  All this year, our congregation – along with others around the world – is marking the 500th anniversary of the posting of the 95 Theses, a milestone event in the history of both the Church and the world, a flashpoint for the Reformation.  But as significant as that document might be, it’s not a particularly “Lutheran” one.  There’s another document that’s even more important for us as Lutheran Christians.  It’s a statement of faith that highlights the key points of what we believe, and why.  It’s called the Augsburg Confession.

On the afternoon of Saturday, June 25, 1530, German princes and laypeople stood before Emperor Charles V and the people of the Holy Roman Empire for an Imperial Meeting (or Diet) in Augsburg.  They had been called to come together to settle the controversies in the church throughout Germany.  The emperor, a devout Roman Catholic, wanted this problem resolved so that the Empire might focus on the looming threat of invasion from the Turks.  (That “problem” became known as the Lutheran Reformation – much to Martin Luther’s chagrin.)  The Lutheran princes knew, though, that they could not simply give up the rediscovery of the gospel that had caused them to see God’s grace with new eyes.  Risking their positions, their wealth, and even their very lives, they read before the emperor their statement of faith, the statement which we now call the Augsburg Confession.

The Augsburg Confession, one of the greatest expressions of what we as Lutheran Christians believe, wasn’t written by Martin Luther.  Philip Melanchthon, one of the other leading figures in the Lutheran Reformation, composed it as a gentle and peaceful response to the emperor and the Roman Church.  This statement of faith is such a clear and gospel-focus articulation of what Lutherans believe, teach, and confess that you can often find the inscription “U.A.C. 1530” (for “Unaltered Augsburg Confession”) in the cornerstone of Lutheran church buildings.  That’s why we’re commemorating the presentation of the Augsburg Confession this weekend as part of our Reformation 500 celebrations.  It’s a reminder of the good news which has brought us all together.  Indeed, if it weren’t for the courage of those people who stood before Charles V to make this confession of faith based in the good news of God’s grace, we probably wouldn’t be Lutheran Christians today – or even Christian at all.

When you hear the word “confession” today, I think that most people are going to understand it as “admission of guilt.”  But that’s only part of the sense of the word.  “Confession” is simply about telling the truth and speaking that truth together.  Our confession of faith is speaking the truth of God’s Word together, saying the same thing that it says: that Jesus is the Son of God, the one who has come into His Creation to restore our relationship with God, the one who did everything necessary to reconnect and reconcile us with God and with each other.  And he has done all that for you.

In our Gospel text today from Matthew 10, Jesus is continuing to speak to his twelve disciples as he sends them out into Israel as missionaries.  He’s sending them to proclaim the good news of the coming of the kingdom of God, bringing healing and life to a broken and death-filled world.  The Lord knows things won’t be easy for his disciples: it’s not going to be all sunshine and lollipops.  In the verses leading up to today’s reading, Jesus warns, “Beware of men, for they will deliver you over to courts and flog you in their synagogues, and you will be dragged before governors and kings for my sake, to bear witness before them and the Gentiles.” (Matthew 10:17-18)  But then he goes on to instruct his disciples, “Do not fear them!”

In our country, I think it’s fair to say that many people outside the church have preconceived notions of what Christians are all about.  Worse yet, they might have had negative experiences with Christians who – for one reason or another – didn’t reflect Christ in their words or actions.  So if you are being called to confess Jesus in the lives of people like that, you’ve got legitimate reasons to be concerned about the consequences of confession.  Would it be easier to simply say nothing?  What if you surrendered your confession of faith entirely to live in peace with those outside Christ’s Church?

Fear kills.  When you or I deny Jesus and the truth of who he is, it’s a symptom of sin at work in us.  It shows a fear of the world that eats away at faith.  If we don’t repent of such fear of others, it can destroy saving faith.

That’s precisely why you and I need Jesus’ encouraging words to the disciples: “[H]ave no fear of them, for nothing is covered that will not be revealed, or hidden that will not be known.  What I tell you in the dark, say in the light, and what you hear whispered, proclaim on the housetops.  And do not fear those who kill the body but cannot kill the soul. … So everyone who acknowledges me before men, I also will acknowledge before my Father who is in heaven.” (v 26-28, 32)  Jesus promises that on the Last Day he will stand before his Father and confess the person who confessed him before others.  He will say, “This is my friend.  This is one you have given me.”

When the Lutheran princes and people presented the Augsburg Confession before Charles V and the Roman Church, they were facing real danger.  Why would they risk their lives to make this public confession of faith?

In the days leading up to June 25, one of the signatories of the Augsburg Confession, George, Margrave of Brandenburg, made a bold statement to the emperor: “Before I let anyone take from me the Word of God and ask me to deny my God, I will kneel and let them strike off my head.”  Margrave George and countless other Christians have publicly proclaimed that Jesus as Lord and Savior because in Jesus alone is a freedom worth living for, even dying for.  They knew that their own souls needed this good news, and they knew that others needed it, too: In Jesus alone do we have victory – victory over sin, death, and the devil – now and forever!

This coming week, we’re going to welcome 100 students into this summer’s Vacation Bible School, “Mighty Fortress: In Jesus, the Victory Is Won!”  We will be confessing that Jesus is the victor for all, the one who came to bring forgiveness, freedom, and life with God.  We’re doing this because we believe that every opportunity that we have for public confession of the gospel, who Jesus is and what he came to do, is looking ahead to the age to come.  We want these children to know God as the loving Father that he is, and Jesus as the one who says to them, “I am your friend.”

We’ll be spending this summer’s sermons exploring the articles of the Augsburg Confession together as a congregation.  Before you go out today, pick up one of the copies of this statement of faith for your household – they’re available out in the narthex – or download it, as you prefer.  Dedicate time to reading it and getting to know what we believe, teach, and confess as Lutheran Christians as we celebrate this 500th anniversary year of the Reformation.  It’s about Jesus: who he is and what he has done for us.

As the Lutheran princes and people did in Augsburg, confess Jesus boldly.  The power of fear has been broken in Christ.  Confess Jesus, and do not fear. 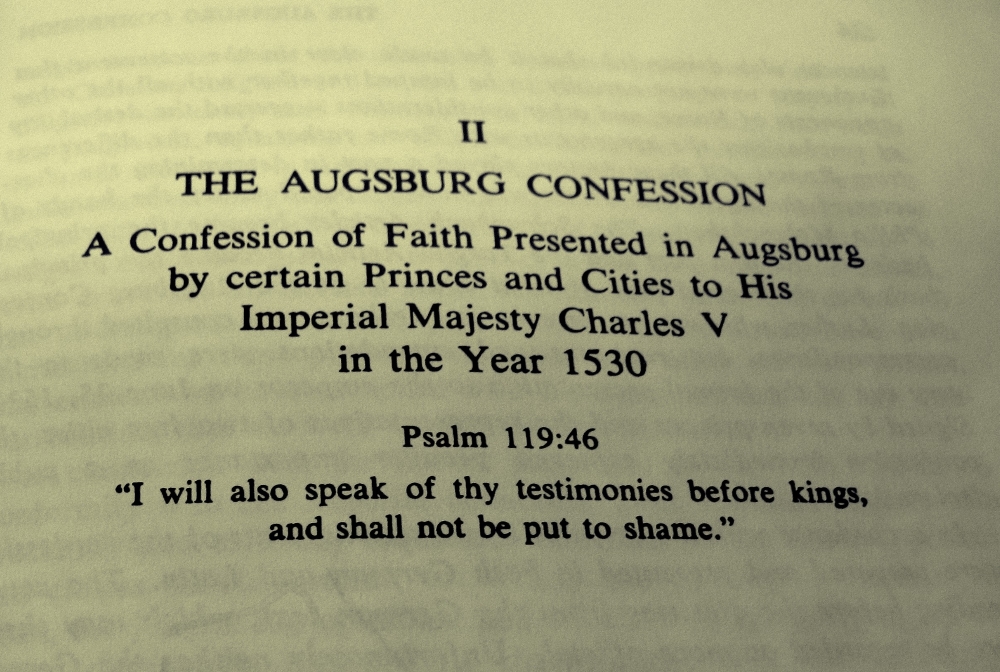