Deliver Us, Jesus, From Fear

“Deliver Us, Jesus, from Fear”

When you’re watching a movie, it’s easier to know when to be afraid.  The music builds.  The camera angles shift.  The floorboards creak and the wind howls.  Something goes “bump” in the night.  But that’s just in the movies.  How are you supposed to know what to fear in real life?  Maybe it’s the unfamiliar sound that wakes you from sleep at 1:00 a.m., the darkness closed in all around you.  It could be the business reporter saying that stocks have dropped yet again, threatening your retirement savings.  Or it might be the change of job, school, or big move that’s waiting in your future.  What’s making you afraid these days, what’s the thing that’s going “bump” in the night?  Anyone heard of this coronavirus thing?

Thanks to widespread media coverage, it’s seeming like a lot of people are afraid of COVID-19, the disease caused by the novel coronavirus that was first identified in Wuhan, China.  The spread of this infection is striking fear into the hearts of people around the world, shutting down massive conventions and sporting events, driving down stock markets, closing schools, and launching hand sanitizer prices through the roof.  (A bottle of Purell® hand sanitizer is pretty much liquid gold these days!)  But why?  Far and away, most of the people who’ve been infected by this virus have recovered after only a mild illness.  The fatalities have generally been people with compromised immune systems or other underlying health issues.  Yes, it still makes sense to be prepared, to take precautions like cleaning your hands and covering your cough, or staying home if you’re feeling ill.  But that’s the same stuff you should do when the flu is making the rounds.  Why all the fear now?

Was Abraham afraid?  God told him to move away from the land and people that he had known, sending him to a new, unknown place.  At the least, that had to be uncomfortable, especially at 75 years old.  It was probably even risky – back then, who knew what kind of people dwelled in a place 500 miles away?  But Abraham trusted the Lord to see him through, so he got up and went.

Nicodemus got up and went, too.  Under cover of darkness, he went to go talk to this Rabbi who had raised such concern and wonderment among the Jewish authorities.  It’s likely that Nicodemus came to Jesus as a representative of some other members of the Sanhedrin, similarly minded people who wanted to know more about what this polarizing teacher meant as he spoke of the kingdom of God.  But Nicodemus might have been afraid, too.  Jesus had enemies.  Nicodemus’ colleagues might see him as student of this untrained teacher from Galilee.  What would happen then?

Nicodemus was confused.  This Jesus of Nazareth must have been sent by God; the signs he has done pointed to that truth.  But the way Jesus talked about God, about life, that was outside of Nicodemus’ experience.  So Jesus uses an example that this teacher of Israel might more readily understand: Moses and the bronze serpent.

Jesus speaks to fear – our fear and Nicodemus’ fear, alike – with a sign of hope. “And as Moses lifted up the serpent in the wilderness, so must the Son of Man be lifted up, that whoever believes in him may have eternal life.”  The wandering, impatient people of Israel had grumbled against God and Moses.  They feared an unknown future, seeing only death ahead of them.  So the Lord sent poisonous serpents among the people, and many of them died.  But when the people acknowledge their sin, God instructed Moses to make a bronze serpent, set up on a pole, so that anyone who was bitten may look upon it and live.  They could have hope, knowing that they would live.  They’d been saved.

As Jesus speaks to Nicodemus, he takes the episode of the bronze serpent and points this teacher of Israel – and us – towards the cross.  In this season of Lent, Christians look to the cross for our hope.  Like Israel of old, you and I have doubted God’s faithfulness.  Even if we haven’t said it aloud, our thoughts and actions testify against us.  We fall captive to fear, fear of the unknown, fear of that which could hurt or harm us, doubting that God will see us through the dangers and discomforts of this life.  But God is faithful still.  The cross of Christ is greater than the serpent of bronze.  Yes, you might still get bitten by things that go “bump” in the night – coronavirus included – but you will live, even though you die.  We Christians can look to the cross for our hope because that is where we will see Jesus.  You can look there to see the exalted Son of Man, the One who was lifted up to rescue our dying world.

In this manner, God loved the world: that the Son of Man was lifted up on the cross so that you and I could have eternal life.  In Baptism, you’re connected with the cross of Jesus.  Even though you get bit in this world broken by sin, you have been born into life which can’t be beaten by death.  Despite what might come, you can look ahead to the ultimate victory that you have in Christ.

And what about Nicodemus?  Later in John’s Gospel, we hear that Nicodemus stood up before the rest of the Pharisees and called out for Jesus to have a fair trial. (John 7:50)  And after Jesus’ crucifixion, Nicodemus was one of the people who went to prepare Jesus’ body for burial on Good Friday, bringing 75 pounds of spices – enough for a royal burial.  What would they say about that?

Like Nicodemus, you and I are called to live our lives now, in Jesus, delivered from fear.  You are sent out, born by the Spirit, borne on the wings of the One who hovered over the chaos at the dawn of creation.  That same Spirit will carry you through life in this world of uncertainty.  Even when viruses rise and stock markets fall, you can look to the cross of Jesus, the Son of Man who was lifted up for you, and see the sign of your hope.

“Deliver us, Jesus, from fear.”  Look to the cross of Jesus and see how God has set you free from fear.  The unknown has lost its power, even though it might hurt or harm you.  Fear can’t win.  You are no longer its captive.

And as Moses lifted up the serpent in the wilderness, so must the Son of Man be lifted up, 15 that whoever believes in him may have eternal life. – John 3:14-15 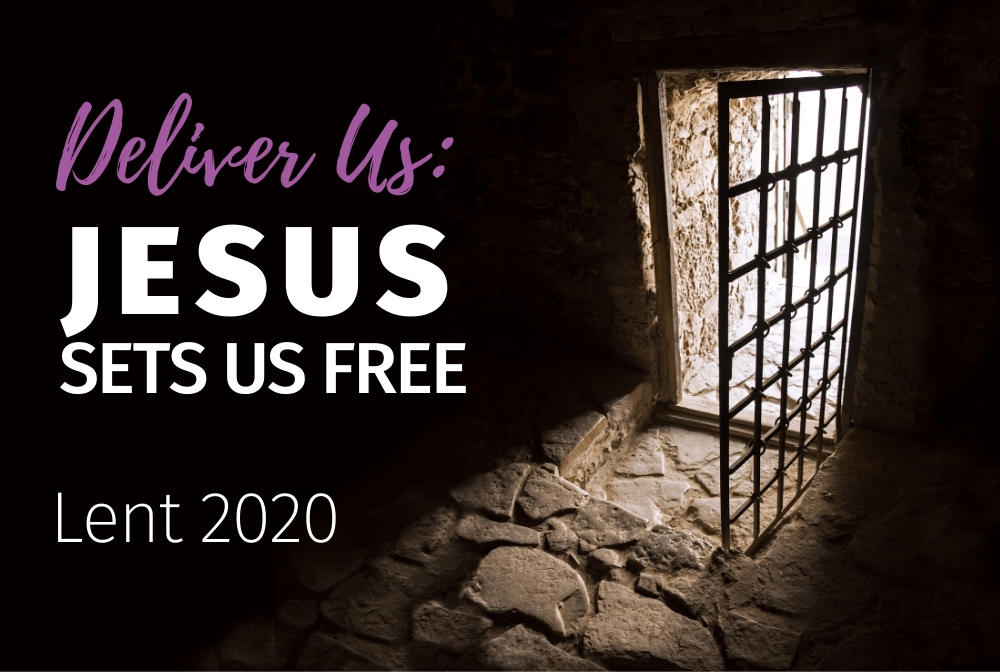 Deliver Us, Jesus, From Death

Deliver Us, Jesus, That We May Love One Another

Deliver Us, Jesus, by Your Death on the Cross