The Fifteenth Sunday after Pentecost

“Belonging: Be the Bridge”

In our month-long series entitled, “Belonging,” we are looking at that sense of relational connectedness that is so important for our life in Christ. As we learned several weeks ago, that connectedness has both a vertical dimension as well as a horizontal dimension – the shape of a cross. We are connected vertically to God our Maker and Redeemer, who has created us in his own image and recreated us according to the image of his own Son, Jesus, who shed his blood for us and for our salvation on the cross. Flowing from this, we are also connected horizontally to one another as brothers and sisters in Christ. In holy Baptism, we are ushered into a new definition of family that moves us from belonging just to our biological family to belonging to one another in the family of faith. As we consider this sense of belonging, both vertically as well as horizontally, the Lord calls us to be the bridge. That becomes the theme for preaching today. May the Lord’s rich and abundant blessing rest upon the preaching, the hearing, and the living of his Word for Jesus’ sake.

Today’s Gospel lesson is one of the more puzzling of Jesus’ parables. It would seem that Jesus is commending the dishonest manager, who then is actually praised by his boss for his shrewdness. The upshot here is that the boss will actually end up losing money on his own business dealings through the deals that his business manager has cut for himself with clients. But the business manager ends up walking away with people who are now indebted to him because of what he did. It’s all very strange. But if we hold onto that image of a bridge, that may help us to understand this parable for our own lives today.

The business manager served as the bridge between his boss and the clients of his boss. The boss entrusted and empowered his manager to act in his behalf. That certainly was and is a position of trust – trust that has to be earned over time. But if that trust is somehow compromised due to suspicious business dealings or questionable transactions, everything can change very quickly. If there is no trust in the relationship, then as they say, “You got nothing.” The business manager lost his job and was on his way out the door. But in the parable, the quick-thinking manager salvages the situation to his own benefit. He cuts the bills of what various vendors owe his boss, and even though his boss lost income from this, he commends the manager for being so shrewd and savvy. We might think, “I’m not sure that would happen in the real world.” By doing this, didn’t the manager just end up digging the hole he was in even deeper? Wouldn’t he just bring more charges against himself by doing this? And yet, even in this dire situation, that business manager was still a bridge.

So what is Jesus’ point here? He tells us: “One who is faithful in a very little is also faithful in much, and one who is dishonest in a very little is also dishonest in much” (Luke 16:10). But Jesus goes on from there: “No servant can serve two masters, for either he will hate the one and love the other, or he will be devoted to the one and despise the other. You cannot serve God and money” (Luke 16:13). It doesn’t get much clearer than that. The manager was called out for what he did. But what about us? Are we trying to serve two masters in our own lives?

Sometimes in trying to figure out what to preach on, you come across something that another has said, and said far better than you ever could. And that’s what happened in preparation for this sermon. I subscribe to the online daily devotions of Lutheran Hour Ministries (www.lhm.org). The devotion for last Tuesday, written by Dr. Kari Vo, was spot on. She wrote the following: “We live in a world that is very much like the one the prophet Amos describes [in today’s Old Testament lesson, Amos 8:4-7]—a world full of injustice. We also know people who ‘trample on the needy and bring the poor of the land to an end.’ Our news media are full of stories about rich people and companies who cheat the poor and harm the people who already don’t have enough to live on. It looks like nothing’s changed. And when we see this, we cry out inside. We groan as we pray: ‘How long, O Lord? How long until these evils come to an end? Do something, Lord!’ God tells us in this passage that He is doing something. He says, ‘The LORD has sworn by the pride of Jacob: ‘Surely I will never forget any of their deeds.’ God is watching, and He is not ignoring the evil He sees. He is taking action. But what is He doing, then? The answer may lie in those words: ‘the pride of Jacob.’ As their ancestor, Jacob stands for the whole people of Israel. And what is their greatest pride, the thing they are most highly honored in? That would be Jesus. That would be Jesus, the Jewish Messiah, the gift of Israel who has become a blessing to the whole human race. Jesus is God’s answer to exploitation and oppression, just as He is to every other [sin]. He is the One who saw us groaning under the power of evil, helpless and exploited. He did not leave us that way—He came to us. He shared our life, being born into a world full of hardship and injustice and downright wickedness. He took all of that into His own life, into His own body, being tortured and killed on a cross for us—the innocent for the not-so-innocent, the harmless One for those who harm and those who are harmed alike. And then Jesus rose from the dead, breaking the power of sin, death, and the devil over the whole human race. He has put the powers of evil on notice—things will not stay that way forever. They will not win. He has already struck the decisive blow against all evil powers, and He will bring them all to a complete end when He returns on the Last Day. That goes for human evil and for supernatural evil. God does notice—and He is taking action” (Daily Devotions :: Lutheran Hour Ministries (lhm.org).

In the Latin language, one of the words used for “priest” is pontifex. The origin of this word comes from another Latin word, meaning “bridge” (pons/pontem, latin word for bridge - Search (bing.com). A priest is one who serves as a bridge between the physical world and the spiritual world. But it is Jesus alone who is our pontifex maximus, our Great High Priest (Hebrews 4:14-16, 8:1ff.). Jesus is the bridge from evil and corruption to forgiveness, life and salvation – that full and abundant life which he alone can give (John 10:10). Belonging to Jesus doesn’t guarantee that our lives will be free from evil and corruption; those things are still part of the world that we live in. Bad things can and do happen to good people, even when we follow Jesus. But Jesus, our Great High Priest, has overcome the world through his life, death and resurrection – that’s what we hold onto. Our full and abundant life in him begins now, this side of heaven, and it will be ultimately revealed when Jesus is fully revealed on the Last Day. Until then, Jesus invites you and me to be his bridges to the world; to be his messengers and ambassadors of hope to people all around us who believe there is no hope; who are struggling under terrible burdens and do not know the light and love of the Lord. And so because we belong to Christ, our desire is that people everywhere receive the same blessing that we have; that they may also belong to him. This is our calling; our mission, not while trying to serve God and money, with divided loyalties, talking out of both sides of our mouth. No, because we belong to Jesus, the ultimate Bridge Builder, we gladly and willingly serve as his bridge to others in daily life. Friends in Christ, be that bridge. Amen. 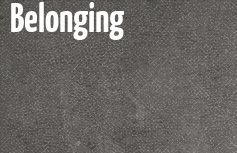