The First Sunday in Advent

Signs – they are all around us. Most often, we think of road signs that give us directions, tell us how far we have to go, or where the next rest area is. Besides the physical signs that line the roadways, we also have voice commands and maps on our smart phones that we plug into our vehicles as we go on trips. We have come to depend heavily on these apps to get us where we want to go. Some of these signs along the way can be quite interesting: at times funny, confusing, or even ridiculous. During this Advent season, we will be focusing on signs – not roadside signs, but signs from the Lord about the coming of his kingdom. Week by week, we will look at the appointed Old Testament lessons for this Advent season under the theme, “This Will Be a Sign for You.” Today on this First Sunday in Advent, we begin with the prophet Isaiah and “The Sign of the Mountain of the Lord.” May the Lord’s rich and abundant blessing rest upon the preaching, the hearing, and the living of his Word for Jesus’ sake.

This four-week season of Advent is all about preparation, and not just for the celebration of Jesus’ birth at Christmas – Jesus’ first coming. The primary purpose of Advent is to help us be ready and prepared for Jesus’ second coming, which is what today’s Gospel lesson reminds us of (Matthew 24:36-44). The word Advent itself is made up of two Latin words, ad, meaning “to or towards,” and ventus, “to come.” And the One who is coming is the One who has already come; the same One who comes to us now in his Word and Sacraments. It’s all about Jesus, whose advent is certain and whose day draws near. Advent is not Christmas, though the commercial world seems to think so. Advent is actually a penitential season, calling us to quiet reflection, humility, repentance, love and good works. Advent calls us to walk in newness of life as we wait and watch for the coming of Christ. This is what Paul the apostle writes about in today’s Epistle lesson: “So then let us cast off the works of darkness and put on the armor of light. Let us walk properly as in the daytime, not in orgies and drunkenness, not in sexual immorality and sensuality, not in quarreling and jealousy. But put on the Lord Jesus Christ, and make no provision for the flesh, to gratify its desires” (Romans 13:12b-14).

The prophet Isaiah is considered one of the major prophets of the Old Testament, along with Jeremiah and Ezekiel. That word “major” can be deceptive, making us think that these three prophets are more important than the other prophets of the Lord. Not true! They are called “major” because the books that b bear their names are lengthier than the other so-called “minor” prophets such as Hosea, Joel, Amos and others. But it is Isaiah who records such clear prophetic utterances about the coming of the promised Messiah, and so we turn to him frequently, especially during the Advent season. In fact, all of our appointed Old Testament lessons during Advent this year are taken from Isaiah. The first of the signs concerns the mountain of the Lord: “It shall come to pass in the latter days that the mountain of the house of the Lord shall be established as the highest of the mountains, and shall be lifted up above the hills; and all the nations shall flow to it, and many peoples shall come, and say: ‘Come, let us go up to the mountain of the Lord, to the house of the God of Jacob, that he may teach us his ways and that we may walk in his paths” (Isaiah 2:1-3a).

The mountain of the house of the Lord that Isaiah is talking about would be Mount Zion, on which the city of Jerusalem itself was built. But it’s not that high – only about 2500 feet. Even the Mount of Olives across the Kidron Valley is a bit higher at just over 2700 feet. You have to go way up north to find the highest peak in Israel: Mount Hermon, at a little of 9200 feet. So what is the Lord saying through Isaiah here? The point is not physical height, but the place where the Lord himself is and from which the Word of the Lord goes out to all nations. It becomes the center of the world for that reason. That Word of the Lord which would go forth from Jerusalem is fully and finally revealed in the Word made flesh (John 1:14), and that is Jesus himself. The One “who shall judge between the nations” (Isaiah 2:4a) is the One who was himself judged by the nations – both his own people as well as the Romans – and condemned to death upon the cross. He took upon himself the judgment that stood against us because of our sin and disobedience; he endured the punishment that should have been ours. Jesus suffered, died, and rose again just outside the gates of Jerusalem there atop Mount Zion. This is the sign of the mountain of the Lord that Isaiah is pointing ahead to hundreds of years later. Jesus himself would be that sign.

Outside the United Nations headquarters in New York City is found “Let Us Beat Swords Into Ploughshares… a bronze sculpture by artist Evgeniy Vuchetich (1908-1974). Vuchetich was an esteemed Soviet sculptor and artist well-known for his heroic monuments… The sculpture depicts the figure of a man, holding a hammer aloft in one hand and a sword in the other hand, hammering the sword into a ploughshare, a tool to till land for crops [based on the words of Isaiah 2:4]… This action symbolizes man’s desire to put an end to war and transform tools of destruction into tools to benefit mankind. The sculpture was gifted to the United Nations by the USSR on December 4th, 1959. It was presented on behalf of the Soviet Delegation by Vassily V. Kuznetsov, First Deputy Foreign Minister of the USSR, to Secretary-General Dag Hammarskjold who accepted the sculpture on behalf of the United Nations” (Let Us Beat Swords Into Ploughshares | United Nations Gifts).

The sign that points us to Jesus calls us to live in new ways that run counter to the world: “They shall beat their swords into plowshares, and their spears into pruning hooks; nation shall not lift up sword against nation, neither shall they learn war anymore” (Isaiah 2:4b). With what seems to be ever-increasing shooting incidents in our country, most recently in Colorado Springs as well as closer to home in Chesapeake, Virginia, the Word of the Lord through Isaiah confronts us today. In a world where might makes right, what do we say to the grieving families of more and more shooting victims? What is the way forward here? Even in the time of Isaiah, kings of Judah as well as Israel relied heavily on weaponry of the day: war horses and chariots, bows and arrows, swords and spears, helmets and armor. But the kingdom of the Lord is not based on armaments and munitions. It is a kingdom where man-made boundaries and borders have no meaning. The kingdom of the Lord has broken into our troubled and violent world through Jesus. This kingdom is a present reality received by faith, but it is not yet fully revealed. That will come about at the proper time as Jesus tells us: “Therefore you also must be ready, for the Son of Man is coming at an hour you do not expect” (Matthew 24:44). But we do see signs of that kingdom even now: offering forgiveness instead of retaliation; responding to the offensive remark with mercy and kindness; putting the best construction on everything; seeking to do good to all people, but especially to those who are of the household of faith (Galatians 6:10). These seemingly small actions can and do have large impact as lives are turned around for good. The domino effect from one such action has the potential to carry forward into the lives of countless other people. And in so doing, we ourselves become a living witness, signs, that point others to our Advent Savior Jesus Christ.

May we see and be the signs of Jesus in this blessed Advent season. “Come, let us walk in the light of the Lord” (Isaiah 2:5). Amen. 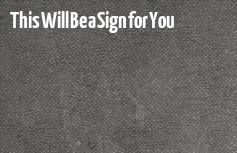 More in This Will Be a Sign for You